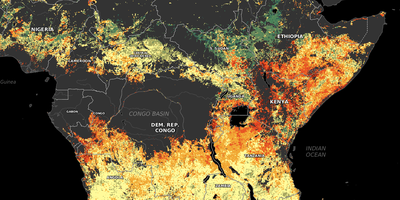 Drought is a water-related natural hazard with some peculiar characteristics: it has a slow onset, can affect extensive regions and last even many years, with serious impacts on population, first of all reducing food production.

In the broad context of drought Early Warning, ITHACA's efforts are oriented towards the development of an automated system (Drought Monitoring), able to monitor relevant environmental variables thus enabling the detection and characterization of vegetation stress conditions. Different parameters are integrated into a simplified drought risk model which considers environmental data related to vegetation production and rainfall. In particular, the near real-time monitoring of satellite derived vegetation indexes allows the early detection of water stress conditions of vegetation, and the monitoring of derived phenological parameters. The latter, coupled with the evaluation of precipitation conditions, leads to a near real-time assessment of the vegetation productivity expected at the end of the considered growing season. The timely detection of critical conditions in vegetation health and productivity allows to spot agricultural areas with increased potential of crop failure or food crisis risk.

A simplified vulnerability model is integrated into the Early Warning system in order to provide estimates of drought impacts. The deterioration of the food security status of any households is here considered as the ultimate effect of a drought event.

The monitoring of the vegetation phenology concerns the study of annual green-up and senescence cycles of plants. Procedures are set up on the basis of near real-time extraction and elaboration of phenological parameters from satellite derived NDVI datasets.

For the purposes of the proposed activities, two phenological parameters, extracted from the yearly NDVI function that best fits the original yearly NDVI time-series, are considered for each vegetation growing season. These parameters describe synthetically the trend of the season in both the time and the integrated NDVI/time domains:

These phenological parameters are related to the seasonal vegetation productivity, considering both agricultural production and available biomass in pastoral areas. Therefore, comparing their current values on a fortnightly basis during the examined growing season with the average, minimum and maximum ones computed using the whole available NDVI time-series (2000 to present), helps to better understand the performances of the considered vegetative season and its expected productivity. In order to quantify the condition of the examined vegetation growing season on a pixel basis, a simple Percent Deviation (PD) from to the historical average value of the considered parameter (SoS or SMI) is calculated. During the growing season and before its conclusion, the near real-time fortnightly evaluation of PDs is performed by considering an approximation of the growing season NDVI function extracted from the historical normal NDVI function. The latter is adjusted by considering the deviation observed for the current fortnightly NDVI value. Monitoring results obtained in near real-time are supplied together with a reliability coefficient which is related to the temporal position of the current observation with respect to the total length of the examined season.

The developed monitoring tool uses, as a base data, global 15-day NDVI time-series (2000 to present) at a 5.6 km spatial resolution, derived from the MODIS MOD13C1 Terra CMG dataset.

In the proposed drought EWS, the monitoring of vegetation conditions based on the analysis of phenological parameters is coupled to the near real-time evaluation of precipitation deficits obtained, for multiple time scales, using the Standard Precipitation Index (SPI). The relationships between rainfall and vegetation dynamics have been statistically analyzed taking also into consideration different vegetation types, allowing to determine the areas where the spatial and the temporal variability in vegetation conditions are closely related to the climate, and the best rainfall cumulating interval (1-3-6 months values) to be used for SPI monitoring purposes in these areas as well. In the areas that show significant correlation values, the fortnightly near real-time monitoring of the precipitation permits to identify earlier warnings, by considering climate conditions before the start of the vegetation growing season. In the same areas, the near real-time SPI analysis supports the monitoring of phenological parameters in a way to identify very critical events characterized by both vegetation productivity and rainfall anomalies.

The proposed precipitation monitoring procedures use, as a base data, rainfall time-series obtained from the Tropical Rainfall Measuring Mission (TRMM) Multisatellite Precipitation Analysis estimation, computed at daily intervals (TRMM 3B-42 daily data), for period of 1998-present.

Vulnerability is here considered as the entirety of factors that exacerbate or mitigate the possible effects of hazard hitting a populated area. Measuring the effects of a disaster implies firstly the identification and definition of what those effects are. As Peduzzi et al. stated in 2009, casualties normally attributed to droughts are typically caused by food insecurity rather than by the natural phenomenon itself. In fact, drought-related mortality is caused by impacts on livelihoods, which contributes to reduce food intake, that in turn leads to the deterioration of health conditions, augmenting diseases, and eventually death (de Waal 1989).

The food security condition of any households or individuals, here considered as the ultimate drought effect, is the outcome of the interaction of a broad range of agro-environmental, socio-economic and biological factors (WFP 2009). The concept of food security, as it is widely accepted, rests on three pillars: availability, access, and utilization of food. In the frame of this EWS only the availability of and the access to food were taken into consideration, the first analyzed with indicators for crop production anomalies and the second modeled considering physical accessibility to markets.

Two different layers serve as basis of the vulnerability model which is applied to the drought hazard layer resulting from the vegetation and SPI monitoring: